History Across The Street 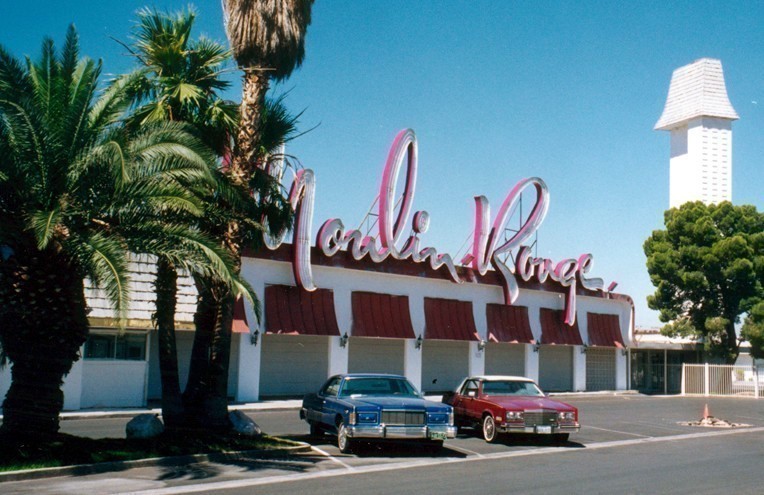 I was having a conversation with long-time regular Bryce about the brewery, where we came from, where we are going and something he said stuck with me.

“I love the patio. It’s nice to sit out there and not have the neon lights flashing back at you.”

Old by Las Vegas standards, our new location was constructed in 1954 and with our improvements it will stand for a bit longer. As you enjoy the ambiance of the brewery patio, consider the history that was made right across the street in the lot once know as The Moulin Rouge. Locals at the time called it the MR.

Opened in May of 1955, The MR would only be open for six months but would change Las Vegas forever. As the first “cosmopolitan” or integrated casino, they blew apart the conventions of the day. Betty Willis, famed designer of the “Welcome to Las Vegas” sign was the creator of the neon lights in cursive that stood at the front of the casino. On opening night, heavyweight champion Joe Lewis was there to greet guests as they entered the french motifs and 110 room property, complete with showroom and coffee shop. Lewis was given two points in the hotel in exchange for his services. A month after they opened, Life magazine referred to him as “Former Heavyweight Boxing Champion Joe Louis, an owner and host of the New Moulin Rouge” which put to rest the rumors that Lewis was just an employee.

The first show boasted the largest chorus line in Las Vegas after a much-publicized talent hunt across the US looking for black dancers for the new hotel. “Tropi-Can-Can” had 23 dancers that dazzled the room with kicks and choreography the likes of which Vegas had not seen before. After the big finishing number the MC was heard saying “That was a popper!” Show innovations didn’t stop there. Entertainers that would pass through the room would include Duke Ellington, Ella Fitzgerald, Sammy Davis, Jr., with Sammy Davis Sr. and The Penguins right before the big hit Earth Angel hit the airwaves. The big thing though, if that was not enough, was The Breakfast Show, which led to the success and possibly demise of the MR.

After the Strip shows were finished, the singers, entertainers, dancers, and all around industry workers would head to the Moulin Rouge for the 1:30am “Breakfast Show”. The get-togethers were impromptu gatherings of the creatives doing jam-band like sessions on stage for a packed house of over 300 people. Imagine Sammy Davis Jr. riffing with George Burns and Gracie Allen while Nat “King” Cole stood on the side ready to jump in with a song. This was the hottest show in Vegas, and it was hurting everyone else. Casinos on the strip started sending dealers home early, pit bosses were talking with each other because the floors were empty. A mandate was put out to the showgirls of the Strip: If you were seen at the MR after hours, you’re fired (which led to the ladies hiding in back seats to make the trip). When Frank Sinatra started showing up suddenly, everyone wanted to be in the same room with Ol Blue Eyes. A third 2:30am show was added on to accommodate sellouts! The common thought at the time was that no one would want to go gamble in a racially integrated casino, but they were so wrong.

Drop boxes were getting stuffed with 100’s, celebrities, locals, and tourists were throwing dice together in boisterous fashion. The mystery of why the Rouge shut down is sort of an enigma given its apparent success. However one can draw some educated conclusions. The Moulin Rouge was ahead of its time as the civil rights movement was about to change America. On an afternoon in October the Nevada Gaming Commission walked into the casino with the Sheriff department and effectively told everyone to stop what they were doing. The casino was closed after only six months of operation. In the press, very little was written about the closing, and the idea that changed Las Vegas forever was closed for good. Two months later Rosa Parks refused to give her seat up in Montgomery Alabama. In 1960 the desegregation of Strip casinos began under what was called “The Moulin Rouge Agreement.” 1992 was the year they named the site a historical landmark, the only site in Las Vegas attributed to the civil rights movement.

What promise the area holds today. As we looked upon our old warehouse and former plumbing supply store at first, there wasn’t much of a brewery to be seen without vision and imagination. Little by little we changed it to fit our needs. Top end refrigeration, high-tech brewing system, the long bar and tap system. The right moves were made, and behold! We made something special for you to enjoy in Las Vegas. As you sit on our patio, day or night, consider the history of the area. Raise a pint to the legacy of that special place across the street long since destroyed by the winds of time. The Moulin Rouge is a testament to the challenge and opportunity presented by change. Albeit a short life, it left a lasting impression.

Steve officially joined our team recently but he has been a part of Tenaya Creek for many years. After growing up in Alaska, Steve found his way to the desert and the doors of Tenaya Creek Brewery. He soon put his skills on the mic to use and started the Wednesday night pub quiz, which has been a weekly staple here at the brewery. With a passion for beer and entertaining, Steve is in charge of communicating all things Tenaya through social media, so tweet at him with your big ideas for how we can keep the beer culture growing here in the desert. We are excited to see what the future brings and we know Steve will help make it exciting. 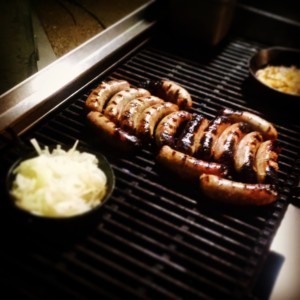 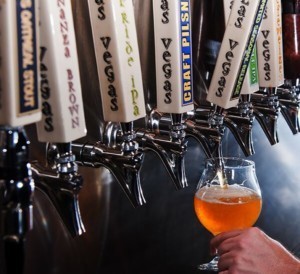